How is an Online Presence like a Tattoo - Ted Talks

I watched a Ted Talk video called "Your online life, permanent as a tattoo". The speaker, Juan Enriquez; who is a Futurist, put a lot into perspective about you online footprint, and how closely it relates to having a permanent tattoo and it makes you want to think twice before you post to Social Media platforms. 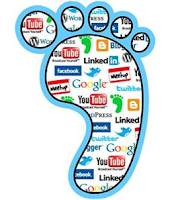 Juan put human and real life situations into trying to get the audience to understand the importance in how serious and permanent social media really is. He said that tattoos shout without saying much and then showed photos of some people with good and bad tattoos, and by one of the bad tattoos he had a caption saying "Serious Mistake"; meaning that sometimes people get permanent tattoos before thinking about why they are getting it, is there any possibility that they may regret it one day, and how they will feel about having it later on in life.

He relates your "Electronic footprint" to a tattoo because even though many people may be unaware of the lasting impression that photos and other things that you post can have on your reputation, even if you end up regretting things you posted about a bad relationship or nasty photos you once posted; there is still some kind of footprint of it; even if you went back and deleted it and tried to get rid of any evidence of it, there is always a possibility that someone may have screenshot it or reposed it, sometimes you have no idea when that stuff even happens either. The best way to prevent ruining your online repetition is to simply WATCH WHAT YOU POST ONLINE.

He then goes on to explain all of the ways that your online presence can follow you, and show how easily people can find out who others are now days with a simple -Face Recognition.  tool from Face.com that has over 18 Billion faces in their system that can easily be recognized with this tool and is 84% - 94% accurate; Face.com was bought by Facebook in 2012. I think a lot of people know what face recognition is, but I don't think they realize how serious of a tool this is and that just by posting a random photo on Facebook, if people on the photo have enough photos of themselves posted online, it will pinpoint it and tell you who it is in the photo- even if you don't know who the person in the photo is.  I know on my Facebook account, I do remember going into my setting and turning the face recognition tool off (meaning I wont get tagged in other people's photos through face recognition, which is probably a good idea for people to do) However- I am pretty sure that just because you turn off that setting in your account doesn't mean that employers can't do a Social Media background check on you find your profiles based on Face Recognition; which is pretty scary.

He used a few people/stories from Greek Mythology to teach the audience a few lessons from this presentation; I listed the lessons he compared to your Digital Footprint below. 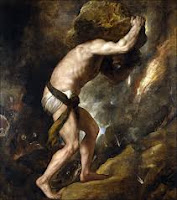 1.) Like "Sisyphus" The gods had condemned Sisyphus to ceaselessly
rolling a rock to the top of a mountain, whence the stone would fall back of its own weight. They had thought with some reason that there is no more dreadful punishment than futile and hopeless labor.-

- The lesson he compared to this was: "To be careful what you post online; as it can greatly affect your Online/Digital Reputation." 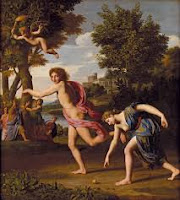 2.) Like "Eurydice"- who was young and in love and inseparable with Orpheus; so much so that they felt as though they couldn't live without each other

- The lesson he compared to this was: "Its not always a good idea to look too deep into the past of those who your love". 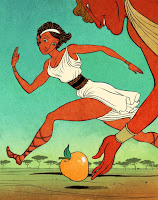 3.) Like "Atalanta and Hippomenes" Atalanta was a beautiful and confident young Greek woman who had the ability to run faster than any other human; the only way a man would get to marry her would be to win the race and Hippomenes did with Golden Apples

- The lesson he compared to this was that: - "No matter how many golden apples you see online- you should be careful what you post late night or out of loneliness; so that you don't regret it." 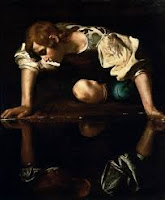 4.) Like "Narcissus" - who was the son of the river god Cephissus and the nymph Liriope. He was distinguished for his beauty.

-  The lesson he compared to this was: "Don't Fall in love with your own Reflection" 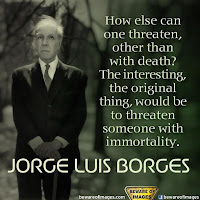 5.) Like "Jorge Luis Borges" - Who stated, "How else can we be threatened other than by Death, the interesting, original thing would be to threaten someone with immorality"

- The lesson he compared to this was that: "Today with all of the new technology and how often people use it and how unaware some are of the impression it makes on themselves, we are all threatened now-days by immorality by our Electronic Tattoos and the reputation that we get based off of them."